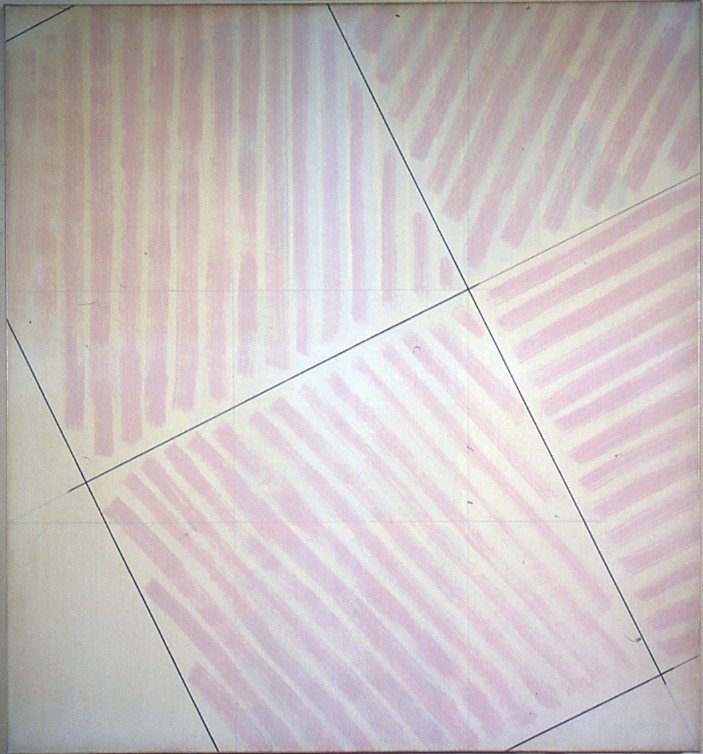 Since 1973, Martin Barré returned to his radical and studied attempts at rendering the fragmentation of space, surface and his work. The artist produces entire series of works and creates geometric assemblies. He brings together triangles, squares and rectangles, sometimes truncated or tinted, and hangs them according to their geometric shape.
Midway between Geometric and Lyrical Abstraction, Martin Barré’s oeuvre may be defined as a reflection
on painting through painting. Invested with a simplicity verging on a sketchlike quality, his work ceaselessly
questions and rethinks its fundamental elements: format, movement, figures, series, even the very installation of his paintings. With titles that look more like bar codes than definitions, his canvasses come
in series. A work is identified solely by the year in which it was painted and its size: enigmatic equations that in turn convey the austere abstraction of the canvasses. Although he deliberately rejected spectacular effects, Martin Barré’s laconic style by no means excluded a
poetic, sensitive approach to painting. Public recognition of his discreet, meticulous work came late in his career. He died in 1993, the same year as the retrospective
held in his honour at the Galerie Nationale du Jeu
de Paume, Paris.