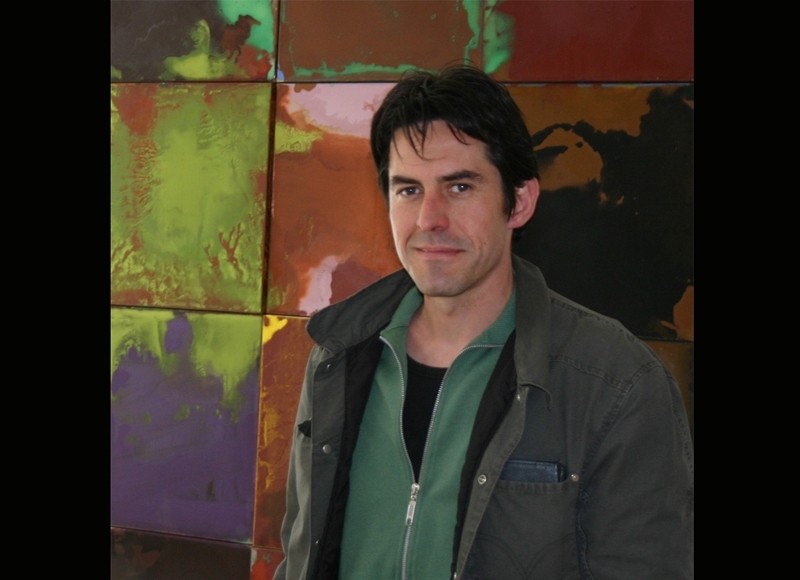 France
Born in 1966
Born in 1966 in Haute-Loire, France. He studied at the Beaux-Arts (Inst. of Fine Art) in St. Etienne where he still lives.
"Franck Chalendard works with salvaged wood or sheets of compressed cardboard, cut into certain regular, simple shapes - squares and rectangles measuring a few dozen centimetres.
These surfaces are then coated and painted with oils by superimposing very liquid colours, laid on as mists and glazes. Sometimes the final colour is opaque: it may also be transparent, mat or glossy. The artist achieves a chart of colour of his own, with strange tones difficult to pinpoint, where strongly-stated colour is mingled with a diaphanous quality. This encounter is tense but not brutal.
Chalendard then arranges these blocks on the wall to form one picture, using fine tacks. The coloured surfaces are not tacked but fitted one after the other. However, interstices remain between them, barely visible. This interstitial element, the gap between the surfaces gives the finished work a shaky aspect. Chalendard sometimes superimposes one block on another in a few places or on part of another block to introduce a colour difference, modify a little and correct the balance or imbalance of the work as a whole. These additions make the surface slightly uneven – this time in terms of flatness . This results in another sort of interplay, which is also barely visible.
The final painting is achieved via the coexistence of these surfaces: it has an unstable, fleeting element – at the same time being strongly present. The component elements differ both in colour (slightly), format and also in thickness (even more slightly). It is a composite picture, a visual chess board, both certain and uncertain. Paintings when carried can travel in separate, packed fragments that will be assembled on the spot. Here again, the declamatory, declarative force of the painting is slightly obscured.
Other works are obtained from leftovers and underpaintings of these operations when Chalendard recovers and reworks the surfaces where directly painted blocks have been laid.
In describing Franck Chalendard's work process, I have no intention of categorising him in an art process or concept. My aim is rather to report on the strange, captivating visual vibration of his paintings. From afar, they seem like geometric constructions similar to those of enlarged constructivist paintings but this construction gives a simultaneous feeling of nuance, subtleness and, why not, a sort of fragility. It is solid and composed, yet delicate, skew-whiff and clashing - the complete opposite of peremptory affirmation. It has a constructivism that is able to make way for the visual vibration brought by any great painting. "
Yves Michaud, 25 April 1998