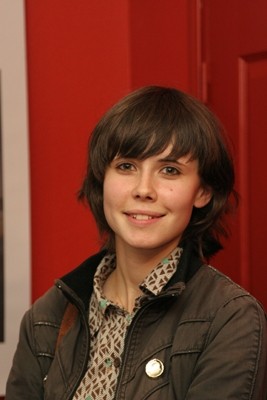 After completing a DNSEP (graduate diploma in the expression of visual arts) from the ESBANM Fine Arts School of Nantes in 2000, Mélanie Vincent was awarded the Nantes Visual Arts Prize in 2010, winning her an art studio in the city. More recently, her work featured at the 56th edition of the Salon de Montrouge (June 2011).
Working with paper surfaces, planks of wood, sheets of metal or Plexiglas, Mélanie Vincent seeks to disturb these media of representation and break through their flat surfaces. The starting point was accidental: a flash imprinted on a photographic surface. The light of the flash, reflected off a pure light (florescent or LED lighting) and “inserted” into these different surfaces, forms an assault on the retina. From this blinding emerges another dimension: an impaired projection space. The image is disturbed, the subject is lit up and the landscape opens up. The flat surface reveals an illusionary depth that both tricks and dazzles the eye. The eye is thus guided to the precise point of the glare in the image - a punctum with a luminous impact that steals the viewer’s gaze, creating discomfort. Beacons of light, they trace an itinerary of a projected mapping.