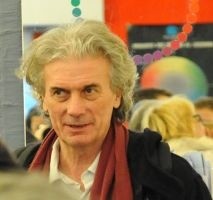 Not just as a painter, but also as film director, author and set designer, Charnay has made in depth research into colour and light. In painting and the study of exotic esthetics, he put his theoretical work into practice.

His esthetic choices, which guide the creation of his paintings, are largely based on his research into colour began several years ago at the National School for Decorative Arts.
The triptych, Renaissance, pays homage to the famous Last Supper by Leonardo da Vinci displayed in the dining hall in the convent, Santa Maria della Grazie in Milan, whose three windows open out into the surrounding nature. The work was designed as a counterpoint to the interior architecture of the restaurant and the surrounding landscape: strongly polychrome, complementing the dominant colours ; the pictorial subject, which contrasts with the surroundings